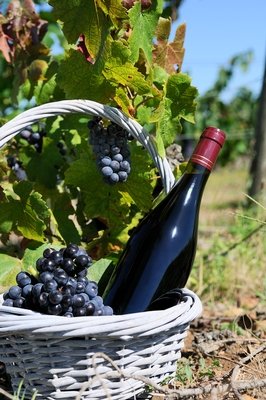 Coq au Vin is a wonderful classic French dish of succulent chicken cooked in red wine. There are many variations of this recipe out there, but it really all comes down to letting the chicken marinate for at least 6 hours before cooking. Personally, I like to serve my Coq au Vin with potatoes or egg noodles and add some peas alongside. The word “coq” in French means rooster and tough birds, which tend to have a significant amount of connective tissues; a benefit from braising.
Most Coq au Vin recipes call for capon or chicken, red wine (often Burgundy), lardons (salt pork), button mushrooms, onions, garlic, and sometimes brandy. The preparation in many aspects is similar to beef bourguignon and the addition of a bouquet garni (thyme, parsley, and bay leaf) gives it a tremendous flavor and aroma. The juices are thickened making a roux or by adding the Chicken’s blood at the end, which is not a method I prefer to use but it is the traditional preparation. Further, there is an array of French wines from different regions when making Coq au Vin such as, Jura, Riesling, Beaujolais Nouveau, and even Champagne. It’s fun to experiment with this dish and use different wines; giving the meal its own unique flavor. Check out my recipe for Coq au Vin in the chicken section, for you’ll love the overall simplicity and intense flavor that this dish will bring to your table. Au Revoir!

Diva Note: Various legends trace Coq au Vin to ancient Gaul and Julius Caesar, but the recipe was not documented until the early 20th century; it is thought to have existed as a rustic dish long before then. In addition, a similar recipe – Poulet au Vin Blanc – appeared in an 1864 cookbook.